UPDATE: DEADLINE APPROACHING
You must make your claim by 18 March 2016

Two million people who were mis-sold card protection insurance can get compensation which may be more than £300 - but only if they claim it.

You should make a claim if you have got a letter that begins like this: 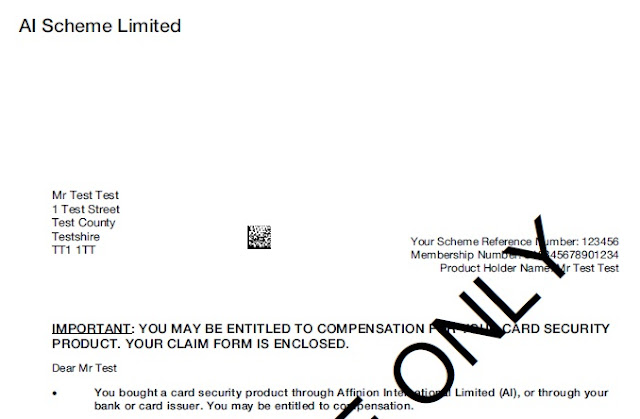 Why am I due compensation?
The compensation is for insurance which was supposed to protect you from financial loss if your credit or debit card was stolen or misused. It promised to reimburse you for any money spent on the card after it was lost. But it was a waste of money.

The banks selling the insurance knew perfectly well that they would bear any loss incurred after you told them you had lost your card. And they also knew they would reimburse all but £50 of any money stolen before they were notified – and in practice they usually reimbursed the first £50 too. So this insurance was useless and should never have been sold. Selling it amounted to fraud - it was misleading you to make money. Don't expect any prosecutions. But you can expect compensation.

When will I get a letter?
Letters and claim forms are being sent out in August and September to the people who can claim. The four page letters are from AI Scheme Limited and include a four page form headed CARD SECURITY PRODUCT: COMPENSATION CLAIM FORM.

You must complete and return that form by a deadline in order to get the compensation. Don't worry if you cannot remember the dates or details of when you started or ended the product. AI Scheme will have that information.


Section B of the claim form has an empty box where you explain why are you are claiming compensation.

The first page helpfully explains why the insurance was mis-sold.


If you paraphrase that information into the box adding ‘these matters were not explained to me’ then your claim will almost certainly be accepted.

The original form (not a copy) must be completed with your name and signature and dated. It comes with a pre-paid envelope. The quicker you return it the sooner you will get paid. It must arrive by 18 March 2016. You should hear back from AI Scheme within eight weeks. It is just about certain that everyone making a claim will get compensation. You will be sent a cheque for the premiums you paid, less any money paid out on the product, plus simple interest at 8% a year on the amounts you paid from the time you paid them to September 2015. Basic rate tax will be deducted from the interest but not the premiums. The total could be more than £300 per card.

If you return the form the insurance you have will be cancelled. Some people like the product and may decide to keep it and not make a claim. You must choose between keeping the product and making a claim. My advice? Make the claim. If you want the protection offered you can always find a similar product on the market. But generally these products are very expensive and offer very poor value for money.

Lost or missing letters
If you have had the letter and thrown it away or lost it you can get another from AI Scheme. Do not use a copy or a downloaded version as it will not be accepted.

Firms and brands
The insurance was marketed by a firm called Affinion International through almost all the major High Street banks. The firms in the scheme are

These firms have all agreed to reimburse customers for the premiums they should never have paid. The premiums cost around £25 per card per year and the mis-selling went on for more than eight years. With 8% simple interest on the premiums from the day they are paid to September 2015 the total compensation could be more than £300 per card.

A similar scheme for a similar mis-sold product by another insurer called CPP resulted in barely a third of the people involved ever being paid. So it is important you make sure you get your entitlement.

You can get more information from AI Scheme and from the Financial Conduct Authority.

If you have one of these products that was sold as part of a current account you paid a monthly fee for, then it is NOT covered by the scheme. You should complain about it to the bank you bought it from using the information about mis-selling above. If you are refused go to the Financial Ombudsman Service.

If you have one of these products sold to you by a bank or firm not in the list above you should complain about it to the firm you bought it from using the information about mis-selling above. If you are refused go to the Financial Ombudsman Service.