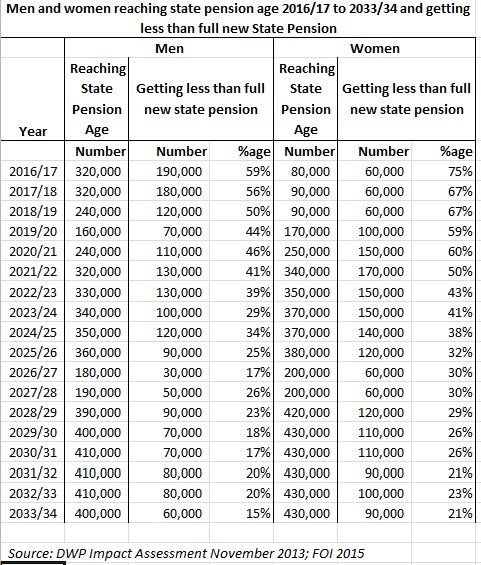 UPDATE 21 NOVEMBER 2015
This paper was written in October 2015 and is now out of date. The Government did not use any sleight of hand on the 2016 pension rates. They are set out in my uprating blog

ORIGINAL VERSION
Is the government planning to save money by changing the rules and trimming the new state pension by more than £3 a week?

Under the current triple lock rules the basic state pension - paid to those who reach pension age before 6 April 2016 - will rise by prices, earnings, or 2.5% whichever is the highest. Prices are measured by the September CPI to be published on 13 October. The most recent CPI was 0.0% and the next one is expected to be much the same.

The earnings rise is measured by the annual increase in pay across the whole economy from May to July 2014 compared with the same period in 2015. The final revised figure is published on 14 October. The preliminary May to July figure was published last week and showed an annual rise of 2.9%. If the final revised figure remains above 2.5% then under the triple lock that will be used to increase the basic state pension from April 2016.

Setting the new state pension
But the level of the new single tier state pension is more doubtful. It will be paid to people who reach state pension age from 6 April 2016 and will be considerably higher than the old basic state pension. One of its purposes is to reduce the number of pensioners who need means-tested benefits. So it will be set above the current level where means-tested help is paid.

Trimming
But could the Government be about to change those long established rules? The rise in the current basic pension is protected by the triple lock agreed by the current government for the rest of this parliament.

This government has never stated its policy on the guarantee credit. And it has decided that other means-tested benefits are either frozen or set to rise with inflation - which with the CPI currently at zero is the same thing. So the government could decide to freeze the guarantee pension credit at its present level of £151.20 for 2016/17. That would require a change in the law (specifically the Social Security Administration Act 1992, s.150A). If it took that course of action the new single tier state pension could be just 5p higher at £151.25 and still fulfil the pledge that it would keep most new pensioners off means-tested benefits.

A new attempt by DWP to explain the new state pension uses that figure in its explanation.

That would mean an effective £3.35 cut compared with the level of the new state pension calculated under current rules.

It would not break any guarantees given by this government. It would go some way to answer the critics who say all the cuts are currently being borne by younger households. And it would contribute hundreds of millions of pounds savings to help deliver the £20 billion cuts which the Government says are needed to balance the budget by 2019/20.

The actual level of the basic state pension, pension credit, and the new single tier pension will be announced with or shortly after the Autumn Statement, expected on 25 November.