One of Britain's top universities is to abolish student fees after the Supreme Court allowed it to charge a royalty on every use of English words online.

From 6 April 2018 Oxford University will use a monopoly granted by Henry VIII to demand money from the one billion people who write online in English. They will automatically be billed a ‘nanocharge’ of 0.0001p by Oxford University Press for every word they publish online if it is in the Oxford English Dictionary. Fees from the estimated fifty trillion English words written online each year will allow the university to make education free at all levels.

The Oxford English Dictionary itself only began in 1859 and rapidly became the definitive record of the language. 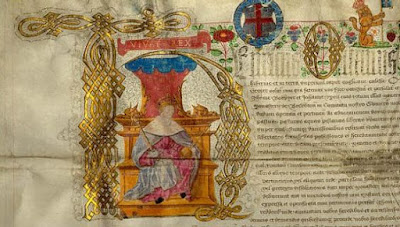 But under Letters Patent of 1523 Henry VIII granted the University “our speciall lycence” to collect money “from thoos persons who prynt in the language of Englonde” and use such money “for the supporting and maynteynyng of the vnyuersite of Oxenford” and the order “shulde passe and be sealed vnder our greate Seale as by our said comaundement as ye haue more parfite knaulage of the language of Englonde than any other”.

The royalty could have been charged at any time since 1523. But early attempts to levy printer’s type led to riots against the so-called “taxes on knowledge”. The situation changed this week when the Supreme Court held unanimously that the words of the Letters Patent could not be clearer” and gave Oxford the right “in perpetuyte” to the copyright on the words in its Dictionary. The court rejected a counter-claim by rival publisher Collins that the Letters Patent were repealed by the Monopolies Act 1624. “No such provision exists in the Statute” said the President of the Court and Oxford graduate Lord Justice Neuberger. Significantly, Justice Lady Hale, the Deputy President who went to Cambridge, did not dissent.

Professor Fiona Nomura, a Proctor of Oxford University Council, told me in an exclusive interview

“For nearly half a millennium Oxford has allowed England, Britain and the world to use the English language free of charge. However, the University is increasingly uncomfortable at Government demands to raise the fees charged to our undergraduates, this year to £9,250. So Congregation decided to use this ancient right to levy a charge on every online use of the words which are the University's copyright and make education at this world beating institution free again.”

She pointed out that Henry VIII himself was a great patron of education and founded several grammar schools and colleges.

Oxford claims the amount “will be too little for an individual to notice but will mean much to our students”.

All words published online will be compared with the online Dictionary and an automatic PayPal debit applied for each word in it. The nanocharge of 0.0001p levied on the estimated 500 trillion online uses of English words each year will raise £500m – more than enough to replace the £110m in fees paid by Oxford’s 12,000 undergraduates. The balance will be used for bursaries and to support its 11,000 postgraduates – who Congregation called “the entrepreneurs of tomorrow” in the so far secret meeting that made this historic decision.

However, Professor Angie Buff of Trinity College Cambridge said the move was a backward step. “It will lead to people misspelling and making up words to try to avoid the nanocharge. They may even start tweeting in foreign languages. It may help a few Oxford students but it will damage literacy and, ultimately, English itself.”

The levy will cover all websites and social media including blogs, Twitter, Facebook, LinkedIn, and even the subtitles on YouTube. Twitter alone publishes 3 trillion English words every year. Oxford is working with GCHQ to extend the nanocharge to encrypted services such as SnapChat.

Professor Nomura confirmed that the copyright only extends to the 600,000 words defined in the Oxford English Dictionary. “Neologisms such as ‘selfiecide’, ‘mansplaining’, and ‘nmh’ will still be free to use, should any ignoramus wish to do so.”

She warned however that the fee would be levied on one new word. At an emergency meeting of the Words Admission National Council English Register this week ‘Brexit’ was added to the Dictionary with immediate effect. Such speed is unusual for an organisation which took twenty-four years to admit the word ‘snozzle’. Professor Nomura denies the haste was to cash in on the word’s popularity. "It is simply because the definition is so clear" she said "Brexit means Brexit," Fi Nomura smiled, “end of."

UPDATE: I have learned that the nanocharge will be brought forward five days and will be applied from 0001 on Sunday 1 April.